children & pesticides - it's not pretty

In November, 1999, the Children's and Families Protection Act (CFPA) was passed by an act of the Massachusetts legislature. In May, 2000 Governor Cellucci signed into law "An Act to Protect Children and Families From Harmful Pesticides. " The act restricts and in many cases prohibits the use of pesticides in and around schools and child care centers. It requires notification of parents and staff prior to application of pesticides. It also requires all schools to have their pesticide application and notification plans in place and available upon request.

Most schools on Cape Cod are now in compliance with the CFPA but there are still many daycare centers that have not filled IPM Plans as required by the law. Check your school.

GreenCAPE suggests that all parents and other concerned adults to call their schools and request copies of their plans after reading the information at the following websites:

Chapter 85 of the Acts of 2000, An Act Protecting Children and Families from Harmful Pesticides, implemented by the Massachusetts Department of Food and Agricultural Resources (MDAR):   Read a summary or the full text of the law, find more information about notification requirements, and find background information about the law.

Pesticide Exposure and Childhood Development in the Yaqui Valley, Mexico - "An Anthropological Approach to the Evaluation of Preschool Children Exposed to Pesticides in Mexico" - a study published in the scientific journal, Environmental Health Perspectives in June 1998.The results of the "draw a person" figures between children exposed to pesticides and those not exposed will shock you. This study was the beginning of our growing understanding of endocrine disruptors.

Prenatal Exposure to Organophosphate Pesticides and IQ in 7-Year-Old Children. Published in the Journal of Environmental Health Perspectives in April 2011, and available online, the study showed that prenatal exposure to OP pesticides was associated with poorer intellectual development in 7-year-old children from an agricultural community in California.

Do pesticides cause birth defects? The American Academy of Pediatrics recently released a policy statement that outlines the harmful effects of pesticides on early fetal development. In 2009, Paul Winchester, M.D., professor of clinical pediatrics at the Indiana University School of Medicine. He reports his findings May 7 at the Pediatric Academic Societies' annual meeting, a combined gathering of the American Pediatric Society, the Society for Pediatric Research, the Ambulatory Pediatric Association and the American Academy of Pediatrics. Dr. Winchester and colleagues found that preterm birth rates peaked when pesticides and nitrates measurements in surface water were highest (April-July) and were lowest when nitrates and pesticides were lowest (Aug.-Sept.). More than 27 million U.S. live births were studied from 1996-2002. Preterm births varied from a high of 12.03 percent in June to a low of 10.44 percent in September. The highest rate of prematurity occurred in May-June (11.9 percent) and the lowest for Aug-Sept (10.79 percent) regardless of maternal age, race, education, marital status, alcohol or cigarette use, or whether the mother was an urban, suburban or rural resident. Pesticide and nitrate levels in surface water were also highest in May-June and lowest in August -September, according to the U.S. Geological Survey. According to Dr. Winchester, babies conceived in April, May and June have higher rates of birth defects such as Down syndrome, cleft palate and spina bifida. Most birth defects, such as spina bifida, happen early in the pregnancy. Although many pesticides are dangerous and can cause serious birth defects, Dr. Winchester cautions that not all are harmful. Dr. Winchester is the director of the neonatal intensive care unit at St. Francis Hospital, Indianapolis, and a clinical professor of pediatrics and neonatology at the Indiana University School of Medicine.

Download and read  the IU study, Time of Conception Linked to Birth Defects in US,  published in the April 2009 issue of the medical journal Acta Paediatrica, and related material on Premature Births and Pesticide.

Alliance for a Healthy Tomorrow

Toxic substances can impact fetal brain development and cause a number of learning disabilities including attention-deficit hyperactivity disorder (ADHD), autism, dyslexia and permanent cognitive damage. Experts say the biggest window of vulnerability to chemicals occurs in utero, during infancy and early childhood. Today, one out of every six children suffers from some form of neurodevelopmental abnormality. The causes are mostly unknown. Some environmental chemicals (including pesticides) are known to cause brain damage and many more are suspected of it, but few have been tested for such effects. In his book ONLY ONE CHANCE: HOW ENVIRONMENTAL POLLUTION IMPAIRS BRAIN DEVELOPMENT --AND HOW TO PROTECT THE BRAINS OF THE NEXT GENERATION , eminent scientist and author Philippe Grandjean provides an authoritative and engaging analysis of how environmental hazards can damage brain development and what we can do about it. Dr. Grandjean, Adjunct Professor of Environmental Health at Harvard School of Public Health, shares in very plain language-the latest research on the profound impacts of pollution on fetal brain development and ultimately on human society as a whole. He tells the truth about how we have been ruining the brain power of each new generation and asks if there are still enough intelligent people in the world today to reverse the problem. He explains why and how society must intervene to prevent exposures now and in the years ahead. At this time about 200 chemicals (including pesticides) are suspected "chemical brain drainers". Check these lists and take care to avoid these chemicals especially during pregnancy and throughout childhood. ONLY ONE CHANCE is available through the Cape Cod library network CLAMS .

Download and check these lists of known brain drainers. On the PESTICIDE list, you will find glyphosate, DDT and 2,4-D among other popular chemicals considered harmless by the powers that be.

Babies are born with over 200 synthetic chemicals in their bodies. CONTAMINATED WITHOUT CONSENT is an eye opening report.

Read the report BODY BURDEN:  THE POLLUTION IN NEWBORNS.

National Children's Study. In collaboration with the National Institute of Child Health and Development (NICHD), National Institute of Environmental Health Sciences and U.S. Environmental Protection Agency, the CDC's Environmental Health Laboratory has announced it will play a key role in the biomonitoring of the ongoing National Children's Study, which plans to follow 100,000 children across the United States from birth until age 21. The study was authorized as part of the Children's Health Act of 2000 and is the largest effort undertaken to address the effects of social, economic and environmental factors on a child's health.

Read the 2010 President's Cancer Panel Report. -Reducing Environmental Cancer Risk: What We Can Do Now. 240 pages of important information. Page 98:"Children are at special risk for cancer due to environmental contaminants and should be protected."A Link from the New York Times article by Nicholas Kristof. 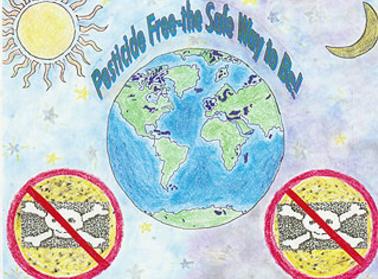