Annual Consumer Confidence Reports are available from every town online, at town hall, or at the local library.

Here is an example from the town of Barnstable MA.

Per-and Polyfluoroalkyl Substances (PFASs) are a class of highly persistent, man-made compounds used in firefighting foam that are showing up in drinking water across the US, including the Hyannis public water system.

MassDEP determined that the releases of PFAS from the use of AFFF (aqueous film forming foam) at the Barnstable County Fire and Rescue Training Academy (BCFRTA) and the Barnstable Municipal Airport are sources of PFASs detected in the Mary Dunn and Maher wells. As part of the MA Contingency Plan, the Potentially Responsible Party files reports of laboratory analyses and efforts to remediate the pollution with MA DEP.

Emerging Contaminants, Septic Systems and Drinking Water
About 85% of Cape Cod residents—and 25% of Americans nationwide—rely on septic systems to process their wastewater. So how well do septic systems fare at removing chemicals such as pharmaceuticals, consumer products, and flame retardants? Silent Spring Institute researchers recently compiled the most comprehensive dataset on contaminants of emerging concern (CECs) discharged from septic systems.   Download Report

Emerging Contaminants in Cape Cod Private Drinking Water Wells
In February 2011, Silent Spring Institute tested 20 private drinking water wells in 7 towns on Cape Cod for emerging contaminants to learn more about the effect of septic systems and other sources of groundwater pollution on water quality on the Cape. Emerging contaminants include chemicals such as pharmaceuticals and consumer product chemicals that may have health effects but are not currently.   Download Report

CEC's - What Can We Do To Reduce Risks?  Sierra Club

Examples of CEC’s include:​​

(Check back frequently as we add more information

Per- and Polyfluorinated Alkyl Substances (aka PFASs) are one example of Contaminants of Emerging Concern (CECs). For more on PFASs, please see Perfluorinated Compounds (PFAS's incl PFOS/PFOA)

USGS Report:Pesticides in The Nation's Streams and Groundwater.

The Quality of Our Nation's Waters: nutrients and pesticides

It is perhaps most striking to directly quote that established, staid, federal agency that is known for just being interested in the facts --the United States Geological Survey. The USGS completed a comprehensive survey and pesticide testing program in 20 major watersheds. They tested for some 86 pesticides out of the 700 active ingredients currently in use. This is comprehensive because most testing covers only about 5 or 6 pesticides.

"At least one pesticide was found in almost every water and fish sample collected from streams in in more than one-half of shallow wells sampled in agricultural and urban areas. Almost every sample from streams and about one-half of samples from wells with a detected pesticide contained two or more pesticides. Although pesticides frequently are found in water, their potential effects on humans and aquatic life are not fully understood."

"More than one-half of agricultural and urban streams had concentrations of at least one pesticide that exceeded a guideline for the protection of aquatic life."

"Many pesticides and their breakdown products do not have standards or guidelines and current standards or guidelines, and current standards and guidelines do not yet account for exposure to mixtures and seasonal pulses of high concentrations. In addition, potential effects on reproductive, nervous, and immune systems, as well as on chemically sensitive individuals are not well understood. For example, some of the most frequently detected pesticides are suspected endocrine disrupters that have potential to affect reproduction or development of aquatic organisms or wildlife by interfering with natural hormones."

is Cheaper Than Cleanup

The following My View Editorial was published June 17 in the Cape Cod Times.  It was written by Robert F. Murphy and David Dow of Cape Cod & the Islands Group-Sierra Club and Sue Phelan and Stephen Seymour  of GreenCAPE.

We laud you for your recent editorial “Worst case scenario? Pay close attention to Hyannis water woes.” The perfluorinated compounds (PFCs) are contaminants of emerging concern that have been detected numerous places in the Cape Cod groundwater. Perfluorooctane sulfonate and perflurooctanoic acid are the PFCs commonly found in the U.S. An Environmental Protection Agency fact sheet points out that those two compounds are persistent organic chemicals found in the air, water and soil which can bioaccumulate in in the food chain to higher concentrations. They pose a threat to human health and wild places, wild things in the environment.

On May 21, the Massachusetts Breast Cancer Coalition, Silent Spring Institute, GreenCAPE, Cape Cod & the Islands Group- Sierra Club and Social Action Committee of the Unitarian Universalist Fellowship of Falmouth held a film screening (“Unsafe: The Truth Behind Everyday Chemicals”) and panel discussion (Sue Phelan; Dr. Laurel Schaider; Dr. David Dow; and moderator Cheryl Osimo). The panel discussed contaminants of emerging concern found in homes on Cape Cod and how they found their way into ground and surface waters. The groundwater PFC situation in Hyannis and the past threats at Joint Base Cape Cod were discussed specifically, along with the ongoing wastewater mitigation dialogue being carried out under Section 208 of the Clean Water Act. Given the sandy soil on Cape Cod and our drinking water sole-source aquifer, there is a close link between our wastewater disposal challenges and the safety of the drinking water we all consume.

We feel that that the towns on Cape Cod should address both our wastewater discharges and drinking water quality/quantity concerns as part of an integrated program. Cape Cod towns will be spending $2 billion to $6 billion over the next 20-30 years in removing excess nitrogen from septic systems and various wastewater mitigation approaches (from centralized sewers and wastewater treatment plants to decentralized ecotoilets and permeable reactive barriers).

Since many towns are developing adaptive, watershed-based solutions to address water quality and habitat loss in our coastal embayments, they could address both of these environmental challenges. The adaptive management process integrates science/monitoring with public policy and outreach via implementation by the local wastewater management authorities. Since these agencies will need to use a variety of financial sources for paying for this long-term infrastructure upgrade, we might as well get the biggest bang for our bucks. Town wastewater mitigation pilot projects; Joint Base Cape Cod groundwater cleanup; existing sewers and wastewater treatment plants; Silent Spring Institute and the Center for Coastal Studies scientific studies; and the county Health Department advanced septic system test site all provide a wealth of data to support the adaptive management strategy.

At some point contaminants of emerging concern may be regulated as toxic chemicals at the state or federal level, which could pose a challenge for treated sewage effluent discharge at ocean outfalls or into our groundwater and disposal of excess sludge from treatment plants. Each wastewater management authority will have to decide what combination of mitigation approaches it will employ in phases over the next 20-30 years based on the monitoring programs and new technologies/regulatory requirements.

Our organizations feel that a more flexible, integrated solution is required that encompasses both wastewater disposal/reuse and drinking water safety/quantity. The situation in Hyannis and at Joint Base Cape Cod could be the tip of the iceberg if we don’t address multiple sources of toxic chemical contamination and the environmental fate and transport of emerging contaminants which may become regulated toxic chemicals. It is cheaper and less stressful to prevent pollution, rather than cleaning it up after plumes develop in the groundwater

Keep Contaminants out of our Water Supply

It’s never too late — or too soon — to protect the water supply, so it is encouraging that a local process was finally initiated that addresses excess nitrogen entering Cape Cod embayments and phosphorus loading of inland water bodies, primarily (but not entirely) sourced from septic systems. We are blessed to live on Cape Cod, but our drinking water is more vulnerable than in most places because of porous, quickly draining sand, which inadequately filters the many pollutants we introduce to our environment. Loosely speaking, today’s wastewater is destined to be tomorrow’s drinking water. Have a drink!

The One Cape Summit on regional wastewater and water quality, running today, is focusing on nitrogen and phosphorus, but clearly these are only two of several problems that need attention to ensure a drinkable water supply and swimmable/fishable waters far into the Cape’s future. Massive financial outlays that manage only those two problems are unlikely to be embraced by already cash-strapped residents and towns. Even if there could be significant state or federal funding to ease the pain, residents will require guarantees. For the estimated billions of dollars required to implement the Section 208 water quality management plan, residents should have every expectation of truly clean water, not just water that has a little less nitrogen, ponds that are not quite as eutrophied, or fewer alphabets in the soup of “ethyl-methyl-bad-stuff” draining from their faucets.

The mainstream consensus on this wastewater and water quality challenge seems to assume that our current drinking water is safe — despite detections of several contaminants of emerging concern, or so-called CECs. These toxicants, which may include pesticides, hormones and various pharmaceuticals, are unregulated in drinking water and not routinely tested for. They have the potential to accumulate in the food we eat and the water we drink. Should we exclude them from the wastewater and water quality plan?

I have concern that the water quality management plan does not commit to more definitive action regarding the CEC pollutants already demonstrated to be in our water, as well as those yet to be discovered. “Adaptive management,” as referenced in the management plan, does not rise to the level of a commitment. Acknowledging that regulation is far behind the current science in this area, the entire process to develop this plan, while forward-thinking in many aspects, is lacking in this area. Will additional structures/treatments for these CECs need to be designed and constructed after the current plan is implemented? And would that demand yet another prohibitively expensive CEC management plan, more structures and treatments in the next decade?

More thorough investigation and incorporation of CEC-eliminating technologies should be added to the final draft of this water quality management plan, regardless of the lack of current regulatory coverage. Lack of regulations cannot be used to ignore known and potential pollutants in the Cape water cycle. Water quality will always be the limiting economic factor for our fishing industry and our tourist-based economy, not to mention our own health.

More information about these CECs and how we can help reduce their presence in drinking water is contained in the Sierra Club fact sheet “Contaminants of Emerging Concern” found on GreenCAPE’s website or  download here: Contaminants_of_emerging_concern.  Make sure these contaminants are part of the plan in our towns when it’s time to vote for funding the water quality management plan.

— Sue Phelan of West Barnstable is Director of GreenCAPE

our water - where does it go? 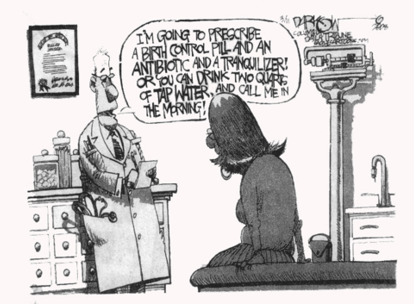 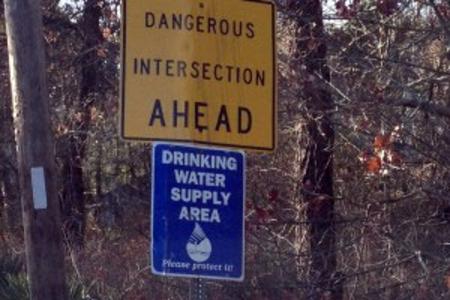 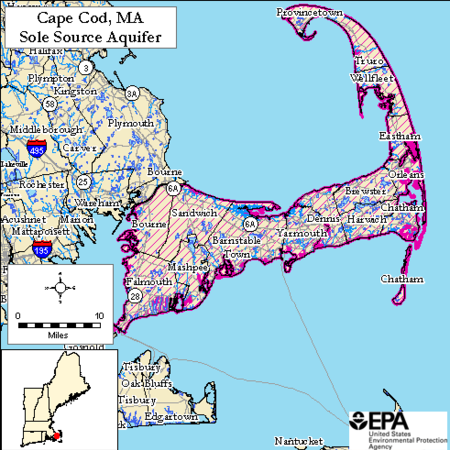